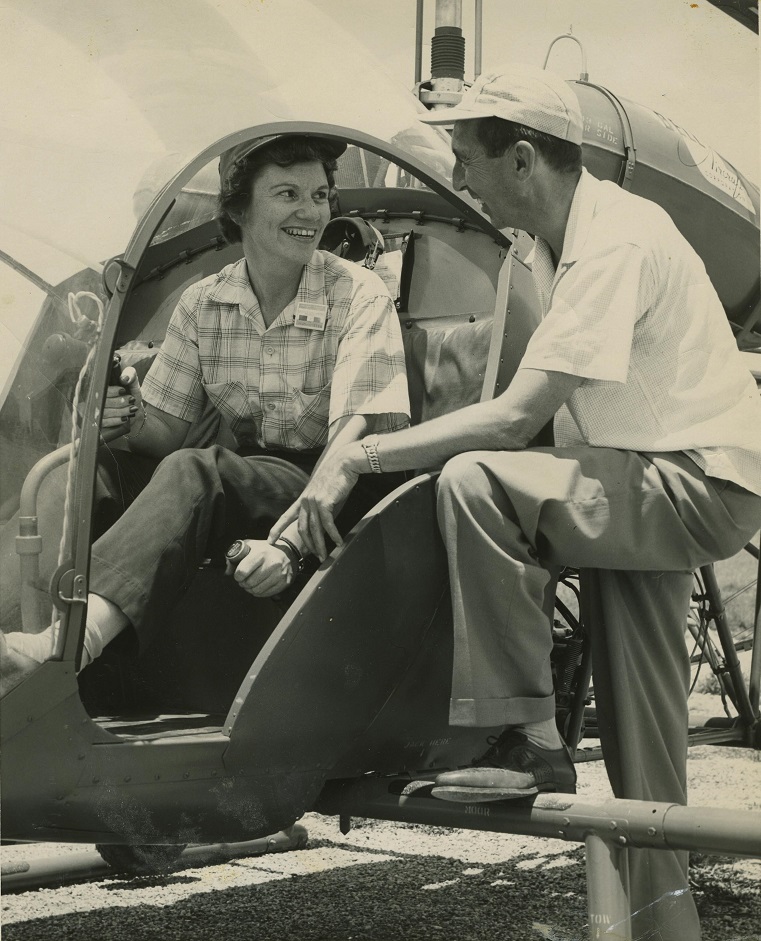 Jean Ross Howard Phelan and 12 other charter members representing women helicopter pilots from France, Germany and the United States were the first to call themselves the Whirly-Girls. On April 28, 1955, Jean founded the Whirly-Girls in hopes of developing an organization where female pilots could share information and camaraderie regardless of country, race, religion, or politics.

Jean obtained her helicopter rating at Bell Helicopter School in Fort Worth, Texas, now Bell Helicopter Textron, in June 1951. Lawrence Bell was the first commercial helicopter manufacturer. He used to tease Jean and called her Whirly-Girl while she trained for her helicopter rating. Jean and Mr. Bell thought the world of one another, and they shared many laughs. She decided to name the organization “Whirly-Girls” out of respect for Mr. Bell. Some of the original charter members were less than excited about the name until they found out that it came from Lawrence Bell.

Years later, the Whirly-Girls membership brought a name change up for vote. It was soundly defeated. Whirly-Girls is still used today as a tribute to both Jean Ross Howard Phelan and Lawrence Bell.

Once a woman earns her initial private or rotorcraft add-on certificate, she can apply to be a member and is given her Whirly-Girls number.

In the early 1950s, the U. S. Аrmy used an innovative way to recruit needed pilots: they created a Helicopter Square Dance Team with four Bell 47s (what the army called H-13s). Two were painted as boys, wearing straw hats with pipes in their painted-on mouths. The other two were painted like girls with blond wigs made from dyed floor mops, and faces painted with lashes and red lips.

The windshields looked like faces, with painted oil cloths taped inside the bubble. The skirts covering the skids were made of target practice cloth. With a caller on the mic and the band playing “Turkey In The Straw,” the helicopter team would perform fast dance maneuvers with the rotors whirling: “Ladies Do-Si-Do,” “Allemande Left.” Air show crowds and TV audiences watched with fascination. (See video below.) 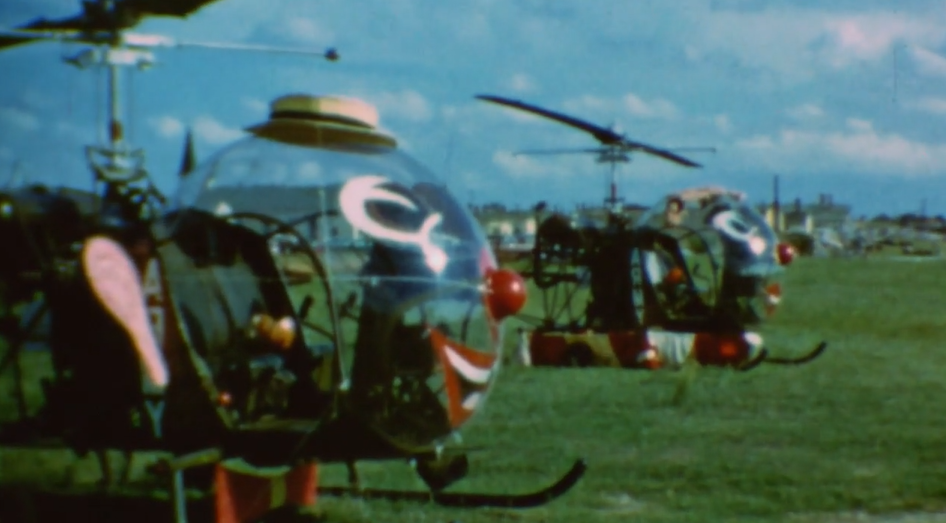 When charter member WG#9 Marilyn Riviere and I first saw the helicopter dance team in action, we instantly agreed to adopt the lady helicopter as the Whirly-Girls logo. Next, we trademarked the logo so we could use it on items to sell for our Scholarship Fund. The rest is history.

Harry E. Gilliand, aka "Ned," was one of the former helicopter girl square dancer pilots and later captain of the U.S. Team at the third World Helicopter Championships. He published a book entitled Dancing Rotors in which he identifies the Whirly-Girls logo.

What About the Medallions?

We continue this tradition of issuing a medallion to each new Whirly-Girl. 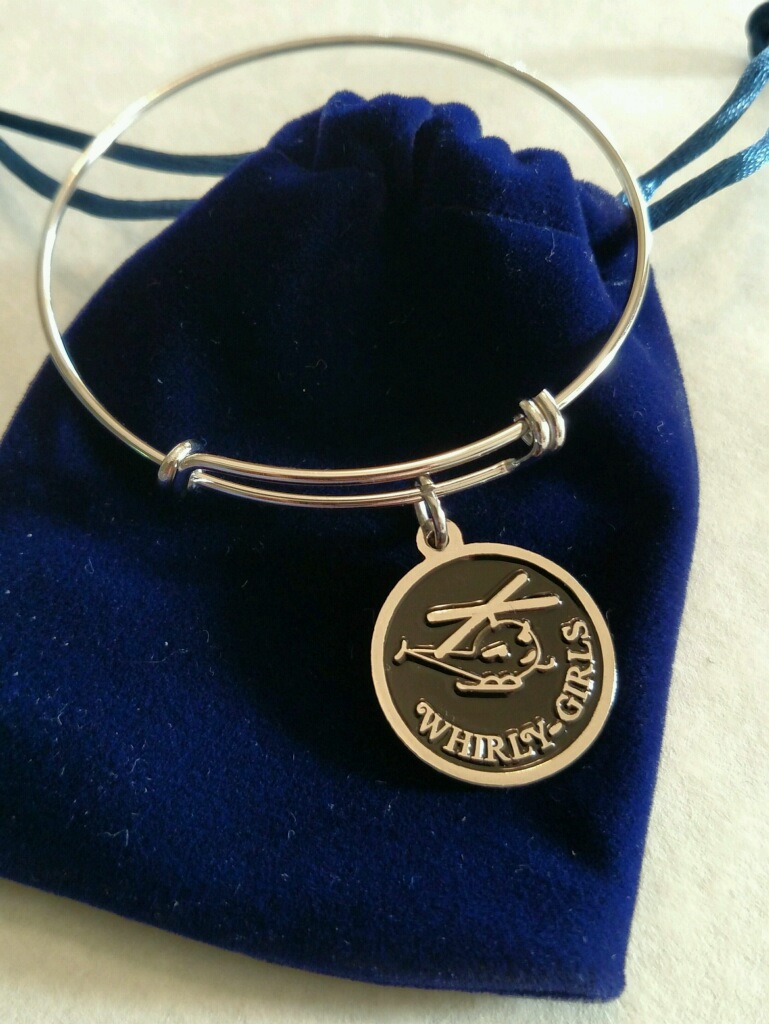 The First Thirteen Charter Members of the Whirly-Girls 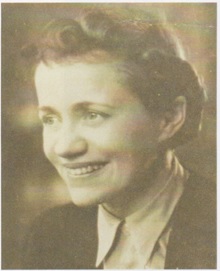 Hanna Reitsch was the first woman in the world to fly a helicopter. In 1938, she flew the world’s first successful helicopter, an FW-61 Focke-Achegelis, inside the Deutschlandhalle (auditorium) in Berlin, Germany. She was a world record holder for sustained flight and altitude in gliders, flew horizontal bombers, dive-bombers, fighter planes, and a ME 163 rocket plane. She was the only person, male or female to successfully fly the V-1 rocket. 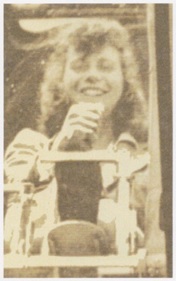 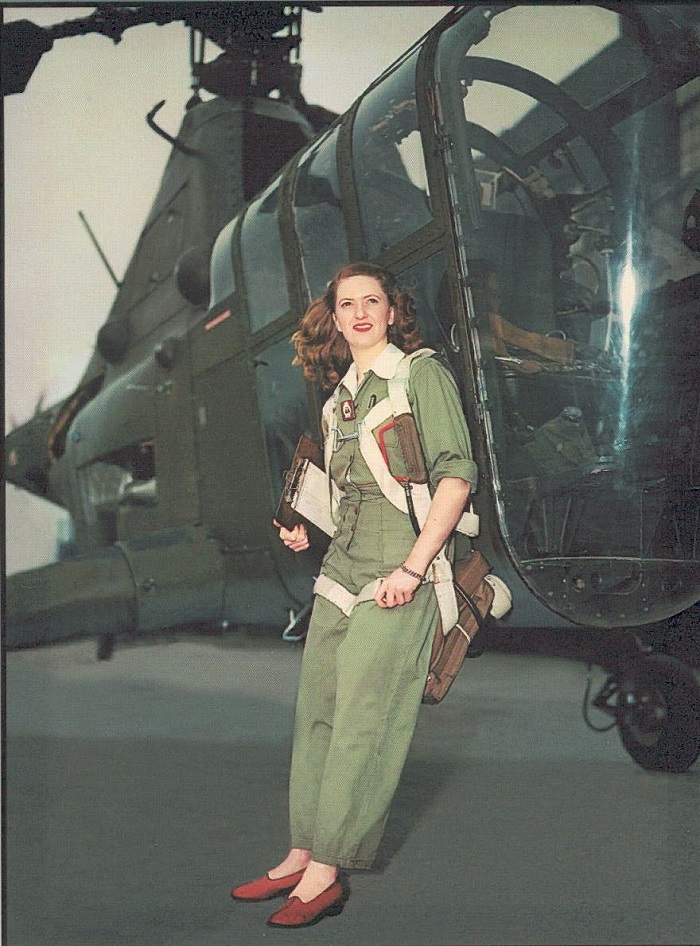 Priscilla "Pat" Handy Swenson first soloed in a helicopter May 28, 1946 and received her rating on July 10, 1947. She was the first woman certified to fly a Sikorsky and the first woman helicopter flight-test observer. She started flying in June 1942 in an effort to join the WASP, but was declined as she missed the height requirement by one-fourth of an inch. 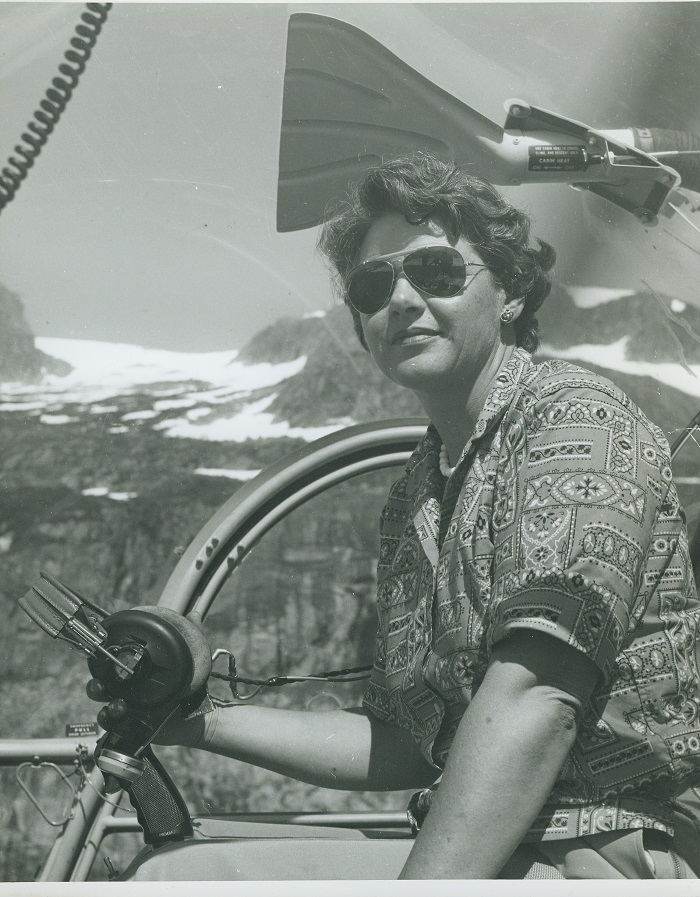 Nancy earned her helicopter and seaplane ratings in 1947. She flew with the British Air Transport Auxiliary during World War II and was the first woman on the West Coast to receive a commercial helicopter rating. She was also one of the first helicopter crop duster pilots and flew over 100 different types of aircraft. She and her husband Arlo operated Livingston Helicopters, Inc. in Alaska for many years. She is the lowest number Whirly-Girl still living. 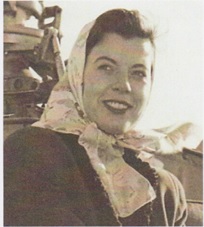 Lyn Alexander began flying during World War II with hopes of joining the Women’s Airforce Member Service Pilots (WASP) but was considered by the U.S. military to be too young and too late. She was one of the first women pilots in the air cargo industry and often had to fight to gain entry into the cargo field. She flew for many short-lived airlines and was the first woman trained at the Bell Helicopter factory. 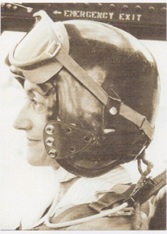 Dr. Valerie Andre was the first French female to become a General Officer, and the first female chief of medicine in a women’s infirmary. She was also a neurosurgeon.

In 1950 she became a helicopter pilot and flew 150 medical missions, notably during the siege of the fortress of Dien Bien Phu. She received many military decorations including the Legion d’ Honour, seven citations of the croix de guerre, the U.S Legion of Merit, the Cross of Valour (Vietnam), and was medical chief of a helicopter squadron.

She flew 129 helicopter rescue missions and made two parachute jumps under combat conditions during the French-Indo China War in the early 19050s. She picked up critically wounded soldiers, fly them to a safe field hospital, and occasionally performed their life-saving surgery. MASH units were later based on her example. She spent 33 years on active duty with the French Air Force and retired in 1981 to become France’s medical inspector general. She wrote two memoirs. 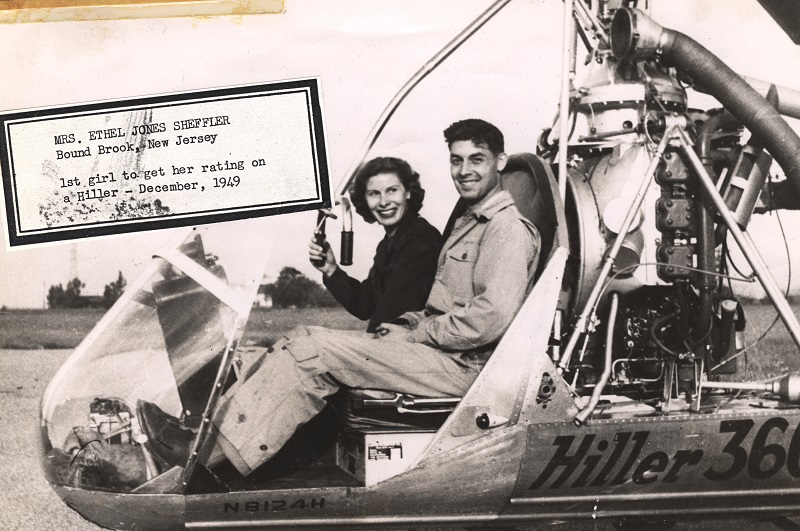 Ethel Sheffler earned her helicopter rating December 13, 1949. She was a member of the WASP, class 44-W-5, and was a fixed-wing instructor for many years. She is shown here with her instructor Hal Symes in a Hiller 360 helicopter. From caption: "Mrs. Ethel Jones Sheffler, Bound Brook, New Jersey, 1st girl to get her rating on a Hiller - December 1949." 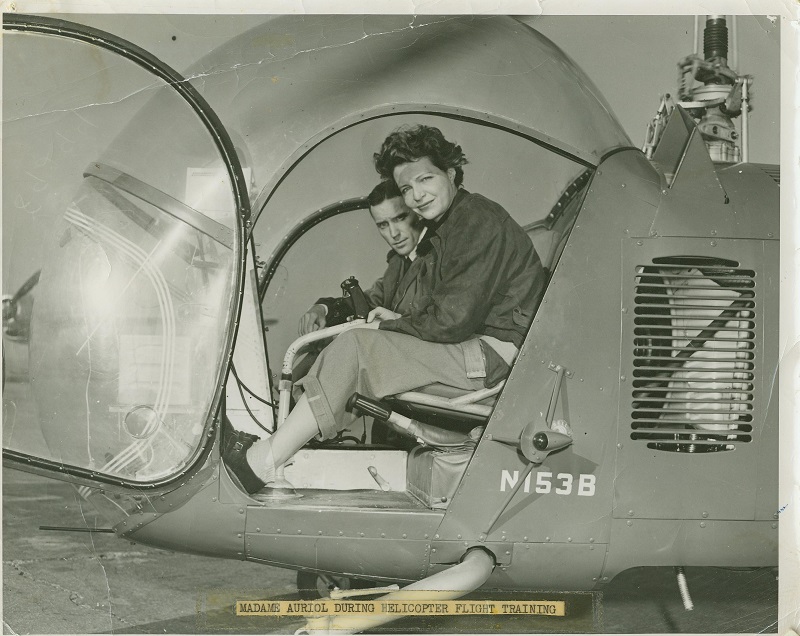 Jacqueline Auriol received her helicopter rating January 23, 1951. She was the first female test pilot in France and the second woman to break the sound barrier. She was awarded the 1955 Harmon Trophy Aviatrix Award by President Eisenhower for reaching the speed of 715.35 mph in a Mystere IV jet-propelled fighter. She also won the world speed record in a Mirage III fighter in June 1963. She is shown here receiving flight training.

Marilyn Riviere and her dog, “Sinner,” began flying in 1939. She instructed in military programs during World War II and was the first woman in the U.S. to become a helicopter instructor. Later, she owned several airplanes, including tail draggers. She flew for fun and helped found the Tail-Draggers Club. Her dog became the Whirly-Girls unofficial mascot and was well loved. 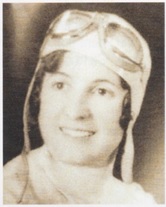 Edna Gardner Whyte was a pioneer racer, a flight instructor, and an aviation entrepreneur. She received her pilot's license in 1928. At a checkride in 1931, the government inspector told her he had never licensed a woman and didn’t want to start. When she was denied the chance to fly for the military, she became an instructor and taught military pilots. While she was refused employment by the commercial airlines, she trained hundreds of students.

In her late sixties, she planned to start an airport in Texas but was denied a bank loan. Undeterred, she borrowed money from friends and blazed a runway across a cotton field. She received numerous aviation awards including the Charles Lindberg Lifetime Achievement Award. In 1984, she was inducted into the Oklahoma Aviation and Space Hall of Fame for her lifetime contributions to aviation. 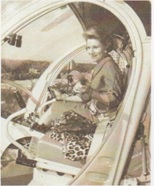 From 1941 to 1943, Jean was employed as pilot-secretary to the combined office of Aeronca Aircraft Corp., Piper Aircraft Corp., and Taylorcraft Aviation, Inc., in Washington. In 1943, she served as a student-trainee with the Women’s Airforce Service Pilots (WASP). She later received an application for enrollment as an officer candidate in the WAVES, the United States Naval Reserve (Women’s Reserve) from Lt. Comdr. Gerald C. Gross. During World War II Jean served with the American Red Cross as Program Director of the Air Force Rest Camp on the Isle of Capri.

In 1949, she was appointed First Lieutenant with the Civil Air Patrol. She participated in two transcontinental air races and in one international air race. In 1952 she was appointed an Arthur Godfrey Air Fellow which entitled her to thirty-five hours of flying instruction from Ashburn Flying Service at the Alexandria Airport in Alexandria, Virginia. She also became a lifetime member of the Flying Turtle Club after completing the Transcontinental Course from Santa Ana, California, to Wheeling, West Virginia, in the All-Woman Transcontinental Air Race of 1952.

In 1953, James H. Doolittle, Chairman of the National Committee to Observe the 50th Anniversary of Powered Flight, commended Jean Ross Howard for distinguished service to aviation during the Golden Jubilee Celebration of Orville and Wilbur Wright’s first heavier-than-air controlled powered flight. She founded the Whirly-Girls in 1955 and encouraged women from all over the world to become helicopter pilots, supporting their love of flying throughout her lifetime.